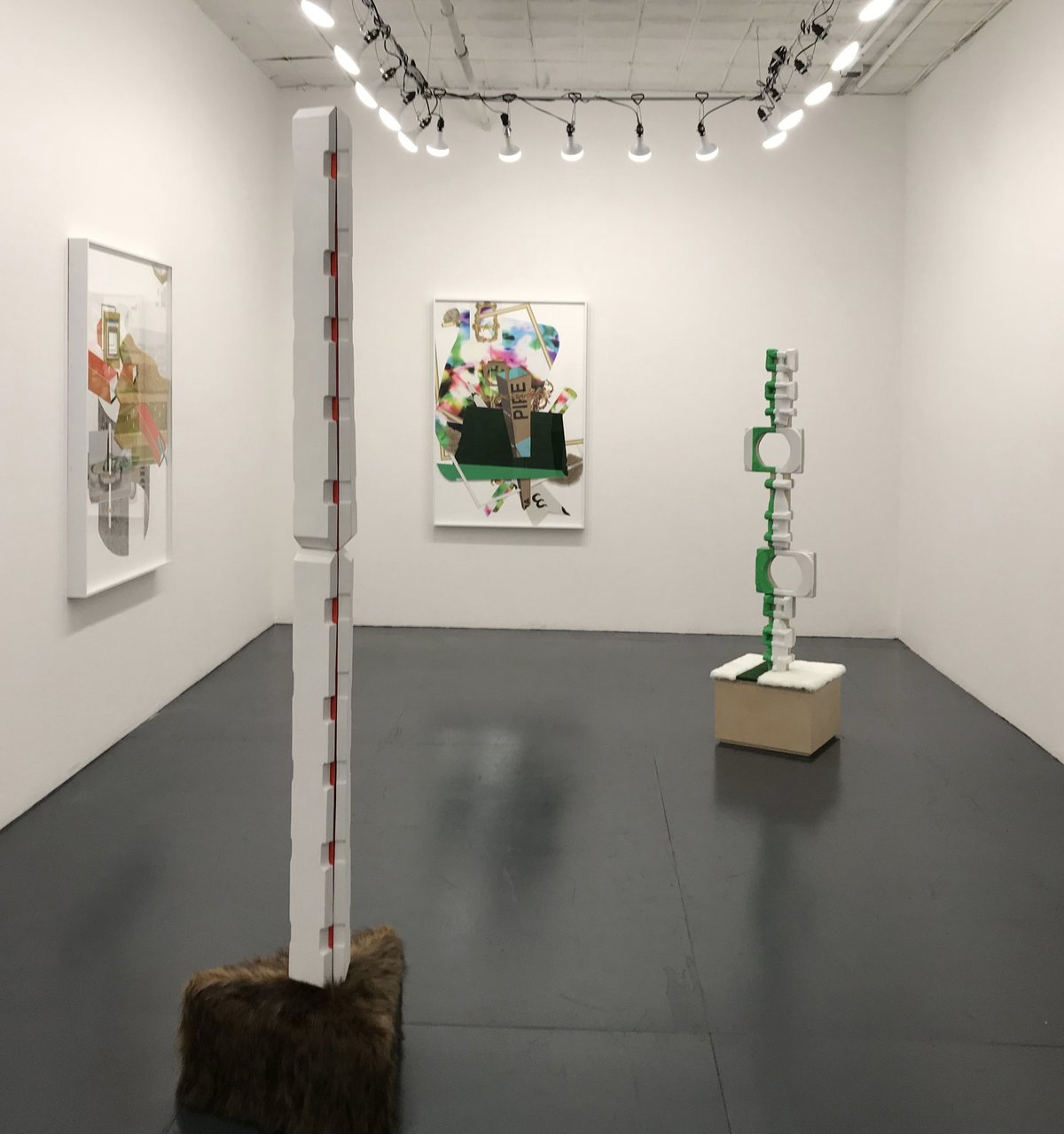 It’s not unusual for dedicated painters and other makers of flat pictures, at some points in their creative lives, to shift their attention to the third dimension. Edgar Degas isn’t known to have said much about his sculpture, but William Tucker has made this declaration about it: “Those elements which despite all efforts remained awkwardly separate in his painting — drawing, handling, composition, subject-matter — cohered and merged into one simple and direct physical activity.”

Presumably, Degas would disagree, but it does seem that the act of working in actual space allowed him an understanding of his motifs (the female nude; the horse) on a level beyond the reach of paint or pastels. Though pictorial space can be irrational, self-qualifying, in a way that sculptural space simply can’t, sculpture’s spatial forthrightness has the potential to clarify the challenges of pictorial space.

The New York artist Sharon Lawless has developed an approach to collage that is muscular, witty, and absolutely beguiling. Her current exhibition at Robert Henry Contemporary, Reusable, includes three stunning recent examples in mixed media on museum board, plus a trio of sculptures that riff on various aspects of the flat work (and, naturally, introduce considerations unique to physical space). The visual dynamics are so vigorous you can almost hear them rattle, bang, churn and chug. But the physical structures maintain a dignified, immobile silence — or at most, a steady hum.

I’m a longtime fan of Lawless’s collages. (I included a pretty big one in The Incipient Image, an exhibition I curated for Lesley Heller Workspace back in 2011.) The presence of three sculptures in the current show took me by surprise, as I’ve always considered the elasticity and ambiguity of pictorial space fundamental to this artist’s visual imagination. But if viewed as distillations of the flat works’ (sometimes covert) architectonic underpinnings, the sculptures suddenly make sense. And they are smart, elegant, commanding structures in their own right.

Like collage in general, Lawless’s come out of Cubism, but rather than “an explosion in a shingle factory” (per Julian Street of The New York Times, c. 1913), these look more like products of some recondite algorithm dredging for the look and feel of the postmodern built environment. In “cre (October)” (57 x 40 inches; all works 2017) rectangles and parallelograms are tossed together, some of which cohere into a set of carpeted steps (a luxe Stairmaster?), along with faux wood grain; the titular word fragment as well as several other monosyllabic formations, including “OOF” and “OB”; and an inset image of an inexplicable piece of furniture that seems to combine a midcentury coffee table and a prosthetic device of some kind.

So there’s a lot going on. Those bits of words, apparently printed on the works’ raw materials, appear here and there in all three pictures, but they signify aurally, as if the artwork is muttering and grunting from its exertions from holding itself together. Scattered through “Psychedelic Dream (June)” (60 x 40 inches) are “BULLE,” “.org,” and the last six characters of the unmistakable corporate identity of Tiffany & Co. Images of frames bob and weave throughout, including ornate gilded frames, their contents excised, that look like shirtsleeves entwined by an extended turn in a high-capacity washing machine.

Lawless excels at finding and combining materials in such a way that the viewer is kept off balance, looking for that elusive through-line, wondering about that algorithm. But we willingly suspend our disbelief in her fiction because its production so darn deft.

Clanking pipes and banging ductwork would be a fitting soundtrack to “LAG (January)” (57 x 40 inches), in which sections of printed diamond-plate pattern and its silver-foil doppelganger vie for supreme fakeness, along with competing systems of perspective. The pressure of the composition’s outside border is in play also, as some elements seem to extend beyond the paper’s edge, while others press against it, heightening the formal tension.

The sculptures don’t exactly bounce off the wall, though one leans against it, at about a 15-degree angle. Titled “Semaphore” (Hydrocal, Flashe, acrylic and latex paint on plywood armature; 72 x 12 x 13 inches), it’s essentially a narrow plywood plank with a bulbous midsection, mitered at the top and bottom for stability and festooned with inscrutable, flattish, chalk-white objects. On a blue horizontal shelf at the vertical midpoint rests a lemon yellow cylinder a few inches across; a similar form protrudes from the back, toward the wall. The work’s symmetry imparts a sober, ceremonial tone quite different from the pictures, though there is a similar sense of disparate parts being marshaled into an unlikely whole.

Most of the cast forms, in this work and the other sculptures, are derived from various extruded-foam and molded-pulp void fills of the kind used in the packaging of small appliances and other consumer durables. In “Alien” (Hydrocal, Flashe, synthetic turf, fake fur, plywood; 73 x 19 x 19 inches), several of these are attached to a hefty, impeccably crafted plywood armature that stands upright on a sleek, cubic base.

It is monumental in scale, if not in size, with a slight contrapposto resulting from the jaunty arrangement of two frame-like components that look like little TV sets. Its color chord of white and woody tan with a vertical green stripe is carried through the base in fake fur and turf — materials that appear as graphical elements in the collages.

“Alley Oop” (Hydrocal, fake fur, Flashe on wood armature; 89 x 21 x 21 inches) carries the sculptures’ essentializing strategy the furthest. From a fur-covered base rises a three-sided pillar, clad in notched slabs and cinched slightly at the middle. The overall form — a vertical shaft that plays off a horizontal plane — echoes a dominant motif in “Psychedelic Dream (June),” minus that work’s spatial gamesmanship. They embody two different ways of thinking about the same basic configuration.

Despite the exhibition’s title, I read neither the collages nor the sculpture as directly addressing consumerism, industrial overproduction, or waste disposal crises. Any such socioeconomic commentary is muted, if it’s present at all. The press release makes a great deal of the artist’s source materials, such as food packaging and other commercially printed paper, card stock and light cardboard, but many artists have found those to be reliable sources of lively colors — alluring but not gaudy.

And while it’s believed that expanded polystyrene and other extruded foam products will take about a million years to decompose, to use them as a source of forms doesn’t necessarily implicate heavy industry any more than casting sculpture in bronze is a critique of foundry methods. The pleasure taken in looking at them need not be a guilty one.

Except for “Little Dancer of Fourteen Years” (1881), Degas’ sculptures were not exhibited during his lifetime — or even much known about, though the evidence suggests that he continuously tinkered with them. (But then, Degas was a perfectionist; Paul Valéry writes that acquaintances would hide their Degas paintings when the master came for dinner, for fear that he would find a canvas unsatisfactory and insist on bringing it back to his studio to resume working on it.)

Lawless’s decision to go public with her sculptural work is fortunate for her audience. Will we see the flat and 3-D work eventually merge, align, or otherwise become a single endeavor? A tantalizing prospect, but the greater pleasure is to savor the dialogue between them now, in real time.