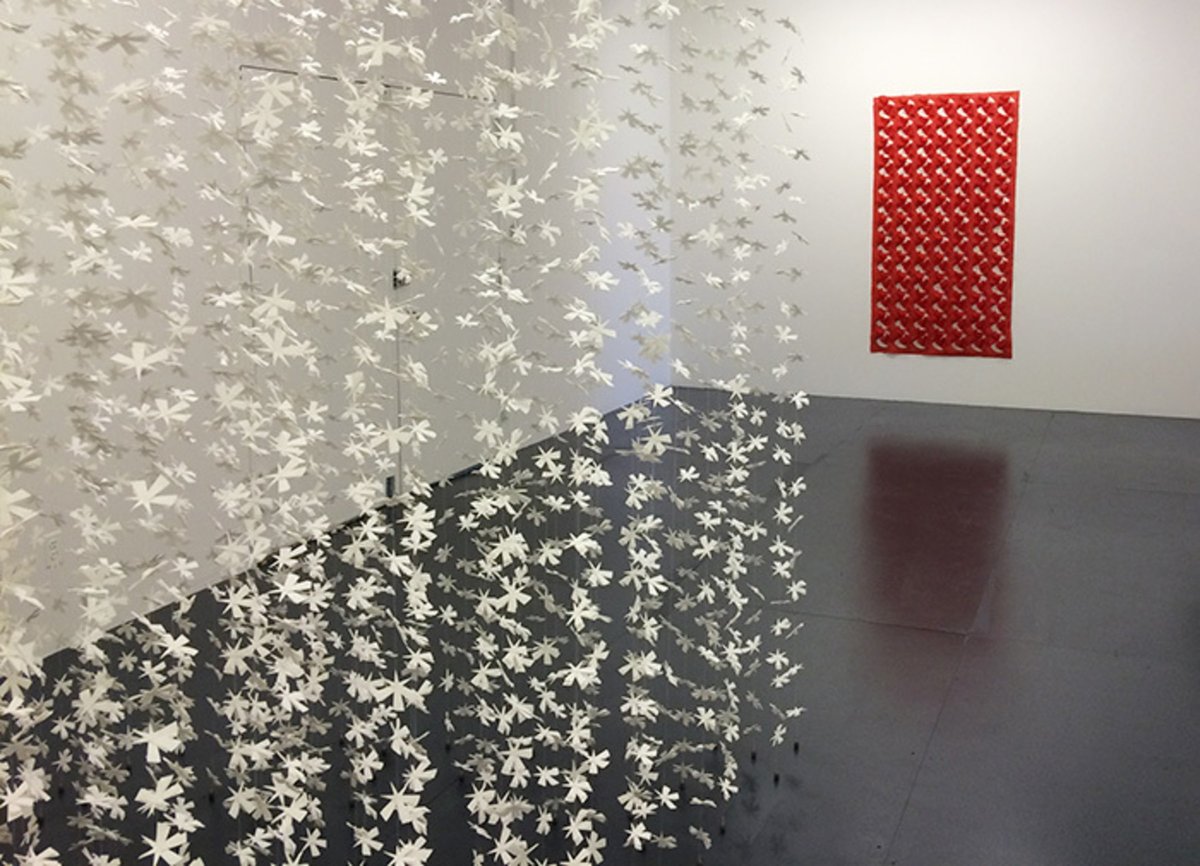 Inspired by the Elizabeth Bishop poem Casabianca, Overboard employs the minimal geometry that artist Liz Jaff has developed over the last 15 years to explore ideas of love, commitment, sacrifice and memory of time and space. For this exhibition, composed of two large-scale works titled Mark Twain and The Good Boy, Jaff obsessively cuts, folds and sews paper and string with exacting consistency. Her compulsion to make sense of time and space through repetition, shape and form is reflected in the visual metaphors of Bishop’s poem.

Bishop’s Casabianca is itself inspired by a poem of the same name by Felicia Dorothea Hemans that was used for children’s elocution exercises. In Hemans’s elegiac work a young boy steadfastly refuses to abandon his post on a sailing ship set ablaze in battle without orders from his father, the captain, who had already died below deck. Bishop uses the boy, a symbol of love, resolutely repeating the first stanza of Hemans’s poem as the ship burns around him as a metaphor for absolute commitment. The boy loves his father and is so committed to the cause of his ship that he makes the ultimate sacrifice while repeating “the boy stood on the burning deck” over and over and over again as he perishes with the ship.

The boy’s commitment in Bishop’s poem reflects Jaff’s necessity of repetition of process and form in her own work. Jaff says, “Ultimately it [Bishop’s poem] speaks clearly of my need to commit to both [repetition and form] as an inevitable means to achieve the objects and space which make sense to me.” Jaff began cutting and folding paper over a dozen years ago. The ephemeral, transitory nature of paper gives her the perfect medium to characterize the fleeting feelings of memory of time and space. Through abstraction and repetition of architectural and natural forms, she makes environments and objects that convey the specific feeling and character of a place or event from her everyday life, and for this exhibition, her reactions to Bishop’s poem.

Mark Twain, a site-specific floor to ceiling (12’ high) installation, consists of hundreds of circles cut and folded into paper fans that are sewn together and strung up into columns with thread, each ending in a lead weight, and makes up the largest of the two pieces in Overboard. Although not necessarily a direct reference to the father in Bishop’s poem, Mark Twain is, however, an oblique reference to a ship and was a term of measure used by Mississippi River boatsmen of the 19th Century to indicate the river was two fathoms or 12 feet deep and safe for the steam boat to pass.

In The Good Boy, a large-scale cutout made of 2 intertwined sheets of red handmade paper, the repetition of 182 perfectly circular folded forms stands as metaphors for completion and the devotion required for lasting fidelity. Like the boy’s repetition of the same phrase over and over in Bishop’s poem as a demonstration of his love and respect for his father, Jaff’s intertwined circles demonstrate her dedication to the precision and laboriousness of her repetitious process as a method to explore shape, form, light, time and space.

Circles, like voyages, begin and end in the same place. A ship leaves its homeport and returns and is akin to the knife Jaff uses to cut the paper that is the water. Circles are symbols of closure, completeness, resolution or one-ness. Like the boy’s steadfast repetition in Bishop’s poem is symbolic of his love and commitment to his father, the reiteration of shape and form and commitment to process is for Jaff symbolic of her love of making. She explores the structural attributes and aesthetic qualities intrinsic to paper and circles allow her a formal tool to investigate the change of light and dark as two-dimensional circles are bent or folded into the three dimensional forms of her highly structured compositions. Jaff states, “these forms are my substitute for the geometric grid, my response to the squares of Sol Lewitt and Carl Andre and homage to Agnes Martin's rectangles.

Click to see more information about the artist:
Liz Jaff 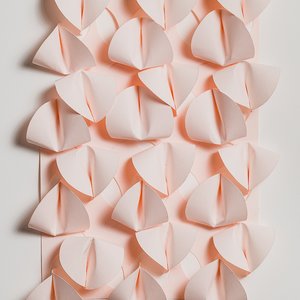 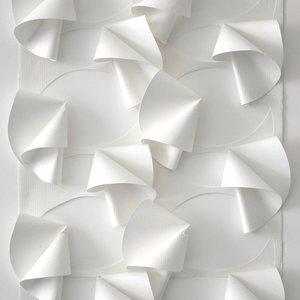 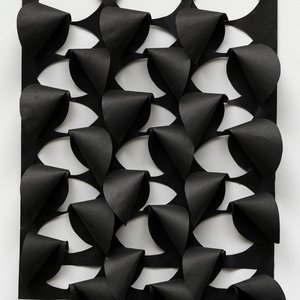 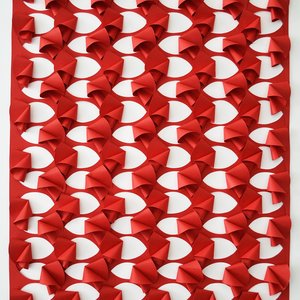 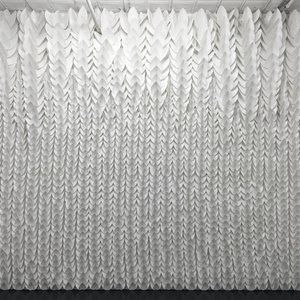 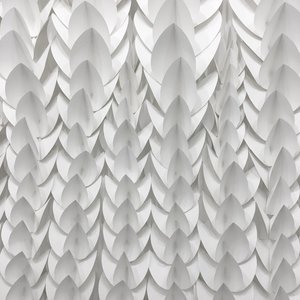 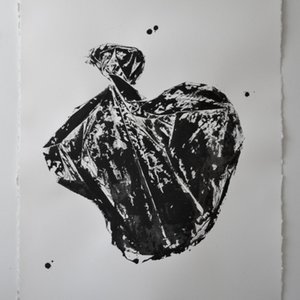 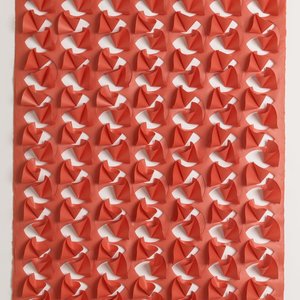 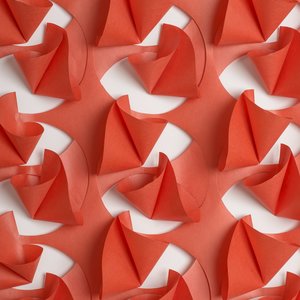 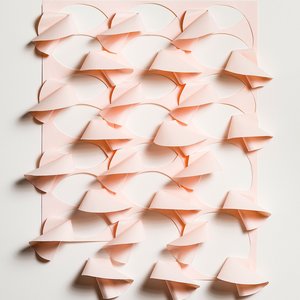 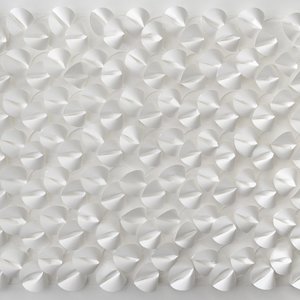 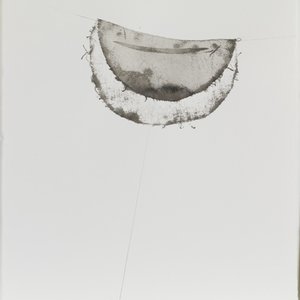